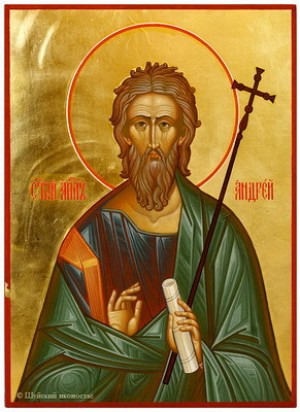 Andrew the Apostle (Greek: Ἀνδρέας Andreas), also called Saint Andrew, was an apostle of Jesus according to the New Testament. He is the brother of Saint Peter.  He is referred to in the Orthodox tradition as the First-Called (Greek: Πρωτόκλητος, Prōtoklētos).

According to Orthodox tradition, the apostolic successor to Saint Andrew is the Patriarch of Constantinople.

The name "Andrew" (Greek: manly, brave, from ἀνδρεία, Andreia, "manhood, valour"), like other Greek names, appears to have been common among the Jews, Christians, and other Hellenized people of Judea. No Hebrew or Aramaic name is recorded for him.

Andrew the Apostle was born between AD 5 and AD 10 in Bethsaida, in Galilee. The New Testament states that Andrew was the brother of Simon Peter, and likewise a son of John, or Jonah. He was born in the village of Bethsaida on the Sea of Galilee. "The first striking characteristic of Andrew is his name: it is not Hebrew, as might have been expected, but Greek, indicative of a certain cultural openness in his family that cannot be ignored. We are in Galilee, where the Greek language and culture are quite present."

Both he and his brother Peter were fishermen by trade, hence the tradition that Jesus called them to be his disciples by saying that he will make them "fishers of men" (Greek: ἁλιεῖς ἀνθρώπων, halieis anthrōpōn).  At the beginning of Jesus' public life, they were said to have occupied the same house at Capernaum.

In the Gospel of Matthew (Matt 4:18–22) and in the Gospel of Mark (Mark 1:16–20) Simon Peter and Andrew were both called together to become disciples of Jesus and "fishers of men". These narratives record that Jesus was walking along the shore of the Sea of Galilee, observed Simon and Andrew fishing, and called them to discipleship.

In the parallel incident in the Gospel of Luke (Luke 5:1–11) Andrew is not named, nor is reference made to Simon having a brother. In this narrative, Jesus initially used a boat, solely described as being Simon's, as a platform for preaching to the multitudes on the shore and then as a means to achieving a huge trawl of fish on a night which had hitherto proved fruitless. The narrative indicates that Simon was not the only fisherman in the boat (they signaled to their partners in the other boat … (Luke 5:7)) but it is not until the next chapter (Luke 6:14) that Andrew is named as Simon's brother. However, it is generally understood that Andrew was fishing with Simon on the night in question. Matthew Poole, in his Annotations on the Holy Bible, stressed that 'Luke denies not that Andrew was there'.

In contrast, the Gospel of John (John 1:35–42) states that Andrew was a disciple of John the Baptist, whose testimony first led him, and another unnamed disciple of John the Baptist, to follow Jesus. Andrew at once recognized Jesus as the Messiah, and hastened to introduce him to his brother. The Byzantine Church honours him with the name Protokletos, which means "the first called". Thenceforth, the two brothers were disciples of Christ. On a subsequent occasion, prior to the final call to the apostolate, they were called to a closer companionship, and then they left all things to follow Jesus.

Subsequently, in the gospels, Andrew is referred to as being present on some important occasions as one of the disciples more closely attached to Jesus.  Andrew told Jesus about the boy with the loaves and fishes (John 6:8), and when Philip wanted to tell Jesus about certain Greeks seeking Him, he told Andrew first (John 12:20–22). Andrew was present at the Last Supper.   Andrew was one of the four disciples who came to Jesus on the Mount of Olives to ask about the signs of Jesus' return at the "end of the age".

Eusebius in his Church History 3.1 quoted Origen as saying that Andrew preached in Scythia. The Chronicle of Nestor adds that he preached along the Black Sea and the Dnieper river as far as Kyiv, and from there he traveled to Novgorod. Hence, he became a patron saint of Ukraine.   According to tradition, he founded the See of Byzantium (later Constantinople and Istanbul) in AD 38, installing Stachys as bishop. According to Hippolytus of Rome, Andrew preached in Thrace, and his presence in Byzantium is also mentioned in the apocryphal Acts of Andrew. Basil of Seleucia also knew of Apostle Andrew's missions in Thrace, Scythia and Achaea.[15] This diocese would later develop into the Patriarchate of Constantinople. Andrew, along with Saint Stachys, is recognized as the patron saint of the Patriarchate.[16]

Andrew is said to have been martyred by crucifixion at the city of Patras (Patræ) in Achaea. Early texts, such as the Acts of Andrew known to Gregory of Tours, describe Andrew as bound, not nailed, to a Latin cross of the kind on which Jesus is said to have been crucified; yet a tradition developed that Andrew had been crucified on a cross of the form called crux decussata (X-shaped cross, or "saltire"), now commonly known as a "Saint Andrew's Cross" — supposedly at his own request, as he deemed himself unworthy to be crucified on the same type of cross as Jesus had been.  The iconography of the martyrdom of Andrew — showing him bound to an X-shaped cross — does not appear to have been standardized until the later Middle Ages.

The Acts of Andrew

The apocryphal Acts of Andrew, mentioned by Eusebius, Epiphanius and others, is among a disparate group of Acts of the Apostles that were traditionally attributed to Leucius Charinus. "These Acts (...) belong to the third century: ca. A.D. 260," in the opinion of M. R. James, who edited them in 1924. The Acts, as well as a Gospel of St Andrew, appear among rejected books in the Decretum Gelasianum connected with the name of Pope Gelasius I. The Acts of Andrew was edited and published by Constantin von Tischendorf in the Acta Apostolorum apocrypha (Leipzig, 1821), putting it for the first time into the hands of a critical professional readership. Another version of the Andrew legend is found in the Passio Andreae, published by Max Bonnet (Supplementum II Codicis apocryphi, Paris, 1895).

Relics of the Apostle Andrew are kept at the Basilica of Saint Andrew in Patras, Greece; in Amalfi Cathedral (the Duomo di Sant'Andrea), Amalfi and in Sarzana Cathedral in Sarzana, Italy; St Mary's Roman Catholic Cathedral, Edinburgh, Scotland; and the Church of St Andrew and St Albert, Warsaw, Poland. There are also numerous smaller reliquaries throughout the world.

Andrew's remains were preserved at Patras. According to one legend, Saint Regulus (Rule), a monk at Patras, was advised in a dream to hide some of the bones. Shortly thereafter, most of the relics were translated from Patras to Constantinople by order of the Roman emperor Constantius II around 357 and deposited in the Church of the Holy Apostles.

Regulus was said to have had a second dream in which an angel advised him to take the hidden relics "to the ends of the earth" for protection. Wherever he was shipwrecked, he was to build a shrine for them. St. Rule set sail, taking with him a kneecap, an upper arm bone, three fingers and a tooth. He sailed west, towards the edge of the known world, and was shipwrecked on the coast of Fife, Scotland. However, the relics were probably brought to Britain in 597 as part of the Augustine Mission, and then in 732 to Fife, by Bishop Acca of Hexham, a well-known collector of religious relics.

The skull of Saint Andrew, which had been taken to Constantinople, was returned to Patras by Emperor Basil I, who ruled from 867 to 886.  In 1208, following the sack of Constantinople, those relics of Saint Andrew and Saint Peter which remained in the imperial city were taken to Amalfi, Italy, by Cardinal Peter of Capua, a native of Amalfi. A cathedral (Duomo), was built, dedicated to Saint Andrew (as is the town itself), to house a tomb in its crypt where it is maintained that most of the relics of the apostle, including an occipital bone, remain.

Thomas Palaeologus was the youngest surviving son of Byzantine Emperor Manuel II Palaiologos. Thomas ruled the province of Morea, the medieval name for the Peloponnese. In 1461, when the Ottomans crossed the Strait of Corinth, Palaeologus fled Patras for exile in Italy, bringing with him what was purported to be the skull of Saint Andrew. He gave the head to Pope Pius II, who had it enshrined in one of the four central piers of St. Peter's Basilica in the Vatican and then in Pienza, Italy.

In September 1964, Pope Paul VI, as a gesture of goodwill toward the Greek Orthodox Church, ordered that all of the relics of Saint Andrew that were in Vatican City be sent back to Patras. Cardinal Augustin Bea along with many other cardinals presented the skull to Bishop Constantine of Patras on 24 September 1964.  The cross of Saint Andrew was taken from Greece during the Crusades by the Duke of Burgundy. It was kept in the church of St. Victor in Marseilles until it returned to Patras on 19 January 1980. The cross of the apostle was presented to the Bishop of Patras Nicodemus by a Catholic delegation led by Cardinal Roger Etchegaray. All the relics, which consist of the small finger, the skull (part of the top of the cranium of Saint Andrew), and the cross on which he was martyred, have been kept in the Church of St. Andrew at Patras in a special shrine and are revered in a special ceremony every 30 November, his feast day.

Tradition regarding the early Christian history of Ukraine holds that the apostle Andrew preached on the southern borders of modern-day Ukraine, along the Black Sea. Legend has it that he travelled up the Dnieper River and reached the future location of Kyiv, where he erected a cross on the site where the Saint Andrew's Church of Kyiv currently stands, and where he prophesied the foundation of a great Christian city. Because of this connection to Kiev, Saint Andrew is considered to be the patron saint of  Ukraine.